Rakesh.K.Pandey
Regional Sericultural Research Station, Miransahib, Jammu, 181101, India
Abstract
Even though, the Silkworm life cycle is eco friendly, silk industry involves certain health risks such as carbon monoxide poisoning in temperate area like Kashmir due to the use of burnt coal to raise room temperature, handling of diseased worms and excreta with bare hands, use of formaline and bleaching powder for disinfection, use of bed disinfectants made from paraformaldehyde, use of organophosphates pesticides to control mealy bug, leaf roller and white fly, use of chlorpyrifos to control termites. Beside, Grainage workers suffer from moth scales, which trigger asthma and conjunctivitis. While cocoons are put in hot water to loosen silk fibres for unwinding, the workers also put their bare hands in hot water, resulting in blisters in their hands leading to secondary infection, such as dermatitis. About 70 Benzidine based silk colorants such as azo dyes, release carcinogenic aromatic amines. Similarly, heavy metal complex dyes, are known to damage mental and central nervous function, lower energy levels and damage blood composition, lungs, kidneys and liver. Trivalent chromium used to fix silk dyes undergoes oxidation into hexavalent chromium, which leads to skin irritation, ulcers, sensitization and allergic contact dermatitis. Lead acetate used in dyeing silk cloth is a neurotoxin. It affects the human brain as well as reproductive system. Lead also affects reading and reasoning abilities in children. Dye factories across the world are dumping millions of tons of dye effluent into rivers without any effluent treatment. Pentachlorophenol, which is used in spray starch before ironing silk garment to protect from mould attack also, pose severe health problems. Formaldehyde resins routinely applied on silk to reduce shrinkage and wrinkling, cause eczematous rashes. Contact with silk cloth with a pH outside the accepted range (5.5), turns the skin flora out of balance and causes irritation. Dermatitis, narcosis, dizziness, fatigue, nausea, headache, eye irritation, adverse reproductive hazards including increased risk of miscarriage and serious neurological problems can all result from the processes of screen printing, where toluene, xylene and methyl ethyl ketone are used as solvents of the inks, thinners and clean up materials. Several health hazards are also associated with weaving and related activities, which cause stress and strain to weavers. Need of including eco parameters testing in issuing silk mark certificate is discussed
Sericulture industry is labour oriented agro industry employing 70 lakh people (5 lakh are sericulture farmers and the rest are stakeholders such as reelers, twisters, weavers, printers etc.) in India. About 23060 tonnes of silk is produced in India annually, which generates a turnover of Rs.25000 crore of which Rs.2500 crore is exported.
Silk production today is a blend of ancient techniques and modern innovations. The first stage of silk production is hatching the silkworm eggs, which have been previously examined and shown to be free from disease. Larvae are then fed cut-up mulberry leaves and after the fourth molt climb a twig placed near them and spin their silken cocoons. The silk is a continuous-filament fiber consisting of fibroin protein secreted from two salivary glands in the head of each larva, and a gum called sericin, which cements the two filaments together. Pupae within cocoons are killed by steam or fumigation to prevent adult emergence, which would cut and tangle the silk filaments. Cocoons are later softened in hot water to remove the sericin, thus freeing silk filaments for reeling. Single filaments are drawn from cocoons in water bowls and combined to form yarn. This yarn is drawn under tension through several guides and eventually wound onto reels. The yarn is dried, packed according to quality, and is now raw silk ready for marketing. Indian silk industry produces basically four types of silks namely Mulberry, Muga, Tasar, and Eri silk. Karnataka, Andhra Pradesh, Tamil Nadu, Jharkhand, Chhattisgarh, Orissa, Jammu & Kashmir and West Bengal are the major hubs of Indian silk industry. The traditional silk sarees like the Kanjeevaram sarees, Banarasi sarees, Konrad sarees, Mysore silk sarees, Pochampally Ikat sarees, Chanderi sarees, Paithani sarees, Patola sarees, Baluchari sarees, Bomkai sarees, Tasar sarees etc., are the exclusive creations of the artisans who use silk as the base material for these sarees. Among non-mulberry silks, Tasar is mostly produced by tribal people settled in different parts and regions of India.
Workers in sericulture industry are exposed to a number of health hazards. Various reproductive and menstrual risk factors for endometrial cancer have been identified, whereas few occupational or environmental risk factors have been explored. Several studies have investigated exposure to insecticides, specifically Organochlorine compounds, but no consistent associations have been reported. Although solvents are considered endocrine disruptors, the only study to date to specifically address solvent exposure and endometrial cancer detected no association (Wernli et al.2008). An association between occupational exposures and health nested within a large cohort of silk workers in India is reviewed here.
Health risk factors during silkworm rearing
Wani and Jaiswal (2011) reported that majority of the rearers in Kashmir are suffering from health problems like, eye irritation, injuries, back pain, allergies, respiratory problems and headache.
Carbon monoxide
Carbon monoxide is known as a silent killer because it has no smell, colour or taste and can be produced by a faulty or poorly ventilated fuel-burning appliance such as partially burnt coal sigri used in Kashmir and other temperate areas to raise room temperature in cold condition. Symptoms of carbon monoxide toxicity consisting of headache, vertigo, nausea and vomiting. We lost a worker at Patnitop (J&K) in rearing room due to CO beyond tolerance level (100ppm). Cherry red lividity is seen in human body due to CO poisoning
Illness caused by unhygienic conditions of rearing
Unhygienic conditions due to accumulation of unutilized leaves and silkworm excreta pose health risk. Any negligence of hygiene leads to silkworm mortality due to two main diseases Grasserie & Flacherie. The dead silkworms, if not removed immediately, putrify and cause illness among rearers.
Health Risk from Formalin used in the disinfection to maintain hygiene

HCHO has strong irritant effect on the eyes and nasal mucous, when present in the air at levels exceeding 0.1ppm. HCHO is a   carcinogen. 2% solution of formaline is employed for spray in the rearing room and on rearing appliances such as trays in a closed room a day before the onset of rearing work.
Health Risk from Bleaching powder
Contact of bleaching powder with skin and eyes may cause severe injury, burns or death. Use of Only 2% solution is recommended for washing trays and rearing rooms
Health Risk from Bed disinfectant (Paraformaldehyde)
Bed disinfectants employed during silkworm rearing mainly consist of slaked lime and paraformaldehyde. Human Skin contact with bed disinfectants result in sensitization, inflammation of the eye (redness, watering and itching)
Health risk factors in mulberry plantation
Risk from 2,4-D Amine used for broad leaf Dicot weeds
Over the past 40 years, dozens of studies have shown the connection between 2,4-D and cancers of the blood
Health Risk from glyphosate for monocot weeds
Glyphosate is employed to control monocotyledon weeds such as Liver seed grass, Urochloa panicoides and Kyllinga brevifolia etc.Carcinogenic potential of Glyphosate , at extremely low concentration, is confirmed.
Health Risk from chlorpyrifos for control of termites
Chlorpyrifos is used to control termites’ world over. Poisoning from chlorpyrifos affect the central nervous system, the cardio vascular, and the respiratory system in human being. It is also a skin and eye irritant
Health Risk from-hazardous organophosphate
Dichlorvos (DDVP) is employed to control pest attack on mulberry, such as tukra, leaf roller and white fly. Dichlorvos is known to induce neurophysiological and behavioural changes in human being
Health Risk from moth scales in eggs production (Grainage)
In the process of silkworm eggs production, male and female moths emerge from the cocoons, copulate and female moths lay eggs. The wings of moth are minutely scaled. The scale allergens trigger asthma, and Conjunctivitis. Around 9% grainage workers suffer from these problems.
Health Risk of Dermatitis in Reeling
While Cocoons are immersed in hot water to loosen fibres, workers tend to put their bare hands in hot water to see if the fibres are loosened to pick silk thread for unwinding. Hot water gives blisters in fingers leading to secondary infection like dermatitis
Health Risk from azo dyes
Government of India has notified Indian Eco Standards (Table-I) and prohibited manufacture and use of Benzidine based 70 dyes, which are known to break down into aryl amines.
The enzyme, azo-reductase, breaks down azo dye molecules into aromatic amines which are then absorbed in the intestine. These are especially hazardous to the workforce. The exporter of silk, have to make sure that their products do not carry any of the azo dyes that are prohibited in the western countries (EU).

Typical eco-parameters under the Eco-labels for finished textiles 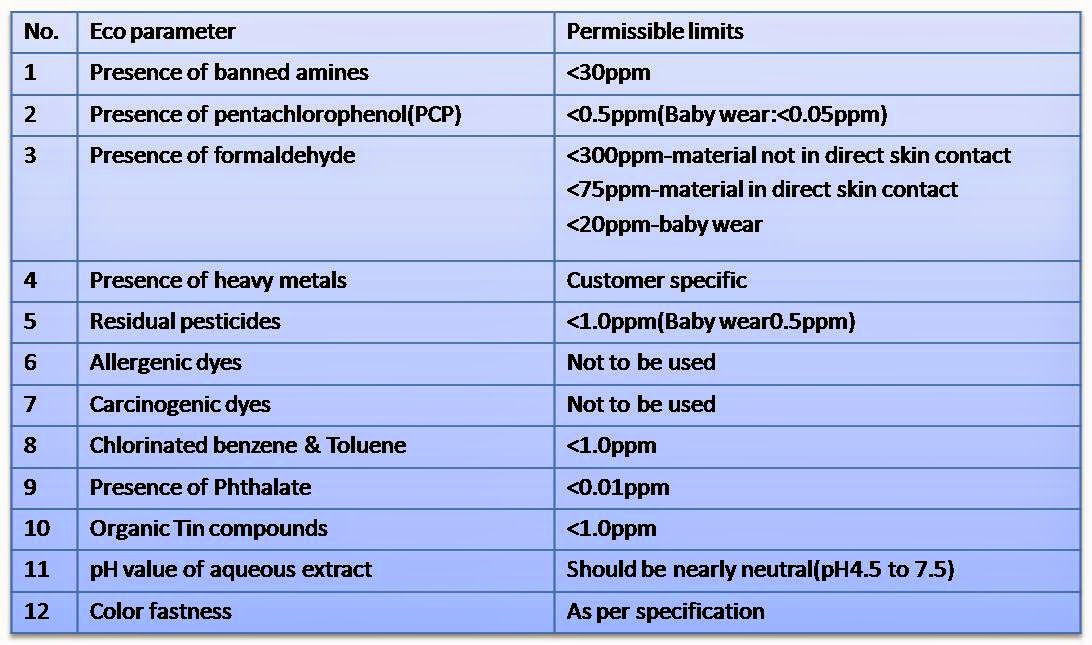 
Health risk from Lead absorption
Lead is used in Lead acetate for dyeing of silk cloth, Lead molybdate in pigments used in dyestuffs and Lead nitrate in mordant in dyeing and oxidizer in dyeing .Lead is a neurotoxin – it affects the human brain and cognitive development, as well as the reproductive system. Some of the kinds of neurological damage caused by lead are not reversible. Specifically, it affects reading and reasoning abilities in children, and is also linked to hearing loss, speech delay, balance difficulties and violent tendencies.

From Dyeing effluents
Dye factories across the world are dumping millions of tons of dye effluent into rivers. The dyeing effluents contain azo dyes, chromium, heavy metals etc.
In accordance with a Madras High court order, around 400 dyeing units were shut down by 2012 and their operating licences were cancelled and the power connections snapped. Only the factories that installed reverse osmosis equipment were allowed to operate.
Health Risk from Pentachlorophenol (PCP) Organochlorine compound such as PCP are used in spray starch before ironing silk saree/garment to protect from mould attack. In humans, its bioaccumulation takes place and poses severe health hazard. Pentachlorophenol is a common ingredient in spray starch that often irritates the lungs.

Health Risk from Formaldehyde resins
Use of formaldehyde in clothing is extremely widespread. There have even been lawsuits alleging high levels of it in Victoria's Secret bras. Formaldehyde is linked to a 30% increase in lung cancer, plus skin/lung irritation and contact dermatitis. It is found in fabrics claiming to be:
It is also used in dyes and printing to fix the design and prevent "running". Eczematous scaly rash occurred after the patient wore a cap containing formaldehyde resins in the silk inner lining.

Health Risk from pH value
Human skin has a pH of about 5.5, acting as a barrier to bacteria, viruses and contaminations. Contact with materials with a pH outside the accepted range turns the skin flora out of balance and causes irritations. Eco mark (India) restricts pH of aqueous extract of the fibres between 4.0 and 7.5.
Health risk from screen printing solvents
The major hazard comes from exposure to the solvents, Toluene,Xylene,methyl ethyl ketone  in the inks, thinners, clean-up materials, (permitted<1 .0="" b="" ppm="">
Dermatitis, narcosis, dizziness, fatigue, nausea, headache, eye irritation, adverse reproductive hazards including increased  risk of miscarriage, and serious neurological problems can all result from the processes of screen printing
Health Risk of Handloom Silk weavers
Several health hazards are associated with weaving and related activities which may cause stress and strain to weavers and pose several health related risk factors to them
Key words: Cancer, occupation, silk, textile