OUT BREAK OF A NEW INVASIVE PEST, PAPAYA MEALYBUG "PARACOCCUS MARGINATUS" IN SOUTH INDIA - A SERIOUS THREAT TO SERICULTURE INDUSTRY

Mr. J.B. Narendra Kumar, Scientist-C working with Central Sericulture Research and Training Institute, Mysore, India. An agriculture post-graduate, interested in the agriculture entomology. Mr Narendrakumar can be contacted at jbnarendra@gmail.com
Dr. M.A. Shekhar, Scientist-D is the Sectional Chief of Pest Management Laboratory, Central Sericulture Research and Training Institute, Mysore. Has developed many IPM packages for the control of mulberry and silkworm pests
INTRODUCTION
The papaya mealybug, Paracoccus marginatus (Hemiptera: Pseudococcidae) is native of Mexico and Central America and it was first noticed in the year 1992 (Williams and Granara de Willink, 1992). During the year 2006, this pest was first reported in Coimbatore area of Tamil Nadu on Papaya. Now it has become a major pest of mulberry spreading fast in sericulture districts of Tamil Nadu causing heavy loss to sericulture industry and has made an entry into bordering districts of Karnataka also, ie., Chamarajanagar and Mysore. As per a recent survey report, an area of about 2,500 acres of mulberry plantation in three districts of Tamil Nadu is severely infested with this invasive pest. Many mulberry gardens have been dried up due to severe infestation and considerable acreage of mulberry has been uprooted.
HOW TO DIFFERENTIATE PAPAYA MEALYBUG FROM TUKRA MEALYBUG?
When mealybugs are pressed in between two pieces of white paper, papaya mealy mealybug gives greenish yellow stain, whereas tukra mealybug gives a pinkish stain. Also, when papaya mealybugs are transferred into alcohol, the body colour turns to black within half an hour. Adult females of papaya mealybugs are yellowish with short waxy filaments around the margin and measure about 3 mm with short caudal filaments, body fluid is yellow in colour, and specimens in alcohol turn bluish black. The detailed biology of the pest is yet to be studied. 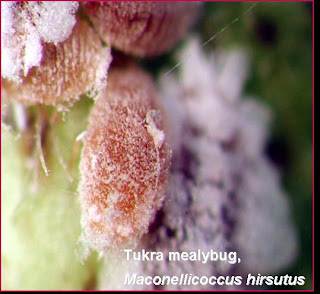 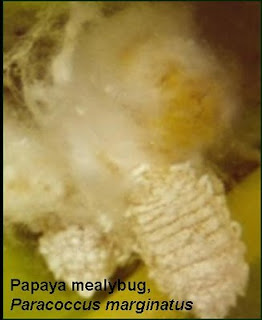 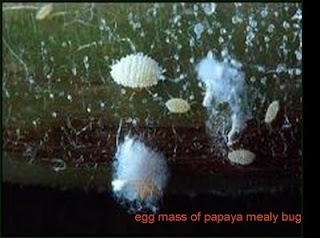 Each adult female mealybug lays about 400-500 eggs with an incubation period of 3 to 4 days depending up on the prevailing temperature. In females, there are 3 stages (ie., egg, nymph & adult) and in case of males, there are 5 stages of development (ie., egg, nymph, pre-pupa, pupa & adult). The first instar nymphs (crawlers) are very active, very small and occupy tender shoot portion or tender leaves and feed by sucking the sap. Later they settle at one place, and continuously suck the sap. Adult females live for 30 to 60 days whereas males do not feed and live for very short duration. They possess a pair of transparent wings. The females do reproduce parthenogentically. Adult females are yellow in colour covered by white waxy secretion and short waxy filaments around the body and short caudal filaments. 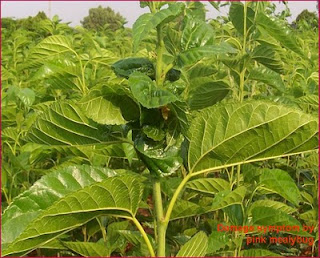 The pest feeds on the sap of the plants by inserting its stylets into the epidermis of the leaf and stem. In doing so, it injects a toxic substance into the plant system thus resulting in chlorosis, stunted growth of plants, deformation of leaves, early leaf drop, a heavy build up of honey dew secretion and finally death of plants. Normally insecticides are not much effective against mealybugs due to waxy covering over their body. Since the adult mealybugs are sedentary in nature, biological suppression of this pest by natural enemies is an ideal alternative and has less risk to non target organisms.
HOST RANGE
It has got a wide host range of over 60 species of plants including economically important ones such as Annona squamosa (Custard apple), Carica papaya (Papaya), Psidium guajava (Guava), Hibiscus rosa-sinensis (Shoe flower), Cajanus cajan (red gram), Ipomoea spp. (sweet potato), Manihot esculenta (Tapioca), Gossypium hirsutum (cotton), Jatropha curcus (Jatropha), Vigna ungiculata (Cow pea), Tectona grandis (Teak), Solanum melongena (brinjal), Lycopersicon esculentum (Tomato) and weed plants like Parthenium hysterophorus (parthenium) & Abutilon indicum (country mallow). Annona squamosa, Carica papaya, Manihot esculenta and Melongena (Meyerdirk and Kauffman, 2001). It is infesting many weeds like Parthenium, hedge plants belonging to Euphorbiaceae family. In Tamil Nadu it has even devastated Jatropa plants which were grown for bio diesel purpose. 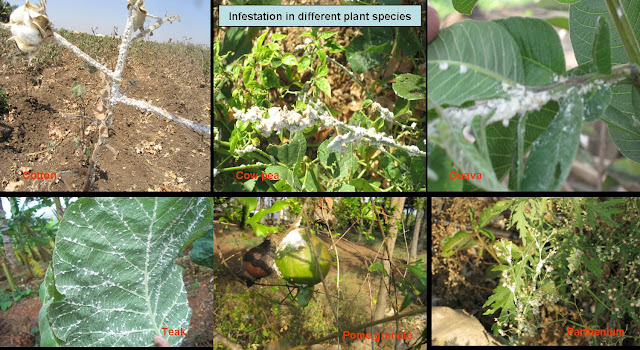 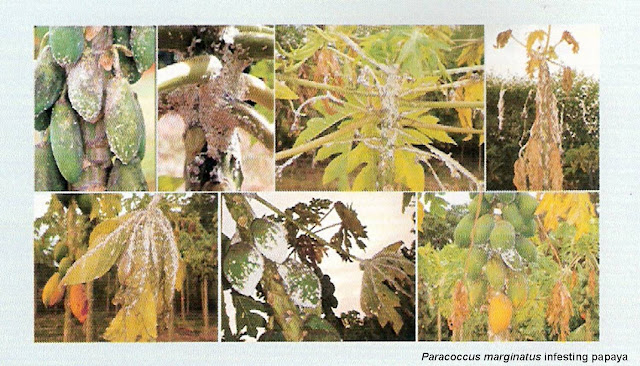 DAMAGE SYMPTOMS IN MULBERRY
Heavy infestation of the Papaya mealy bug is noticed on the under surface of leaves and usually along the veins and midribs in older leaves and on all areas on the tender leaves. Severely affected older leaves turn yellow and dry up. Tender leaves become crinkled. Terminal shoots become bunched and distorted. Heavy mealybug populations produce a large volume of honeydew, which facilitate the development of black sooty mould, which covers the infectedportion. The mealybug injects a toxin as it feeds on leaves, which results in chlorosis (yellowing) stunting, deformation, early leaf fall. Development of sooty mould makes the mulberry leaves unfit for silkworm rearing. The Papaya mealy bug infests all parts of the mulberry plant unlike the pink mealy bug, Maconellicoccus hirsutus, which infests only the apical portion.
MANAGEMENT OF PAPAYA MEALYBUG
For the management papaya mealy bug infesting mulberry no studies have been carried out. To meet the immediate requirements of the industry a modified IPM was formulated on the line of IPM of pink mealy bug infesting mulberry. The same modified IPM was tested with in the severely infested mulberry gardens in Tamil Nadu (Erode and Coimbatore districts) where, nearly 1500 to 2000 acres of mulberry gardens were infested. The farmers are following the modified IPM package formulated and recommended together by CSR&TI, Mysore and Tamil Nadu Agriculture University, Coimbatore and are able to reduce the infestation to a considerable extent. Modified IPM package has given 70 - 80 percent reduction in pest infestation. The silkworm rearing brushing capacity which had come down drastically by 80 to 90% has increased and the leaf yield has also considerably improved.
To prevent the outbreak of the pest, authorities of the region should draw a comprehensive plan on war footing measures. The young crawlers of the pest are very minute and appear like fine powder to naked eye and they can be easily drifted to different places through wind. It is not possible to combat this pest only through chemical measures. Simultaneously, we should also employ physical and biological methods to reduce the incidence of this dreaded pest.
In North America this pest has been controlled to an extent of 90% through classical bio-control approach. CSRTI, Mysore in collaboration with NBAII (Formerly PDBC), Bangalore and Tamil Nadu Agricultural University, Coimbatore has initiated a research project to develop control measures on the lines developed in North America. NBAII has already made all proposals to import the exotic bio-control agents to test them in India to control this pest.
IPM PACKAGE FOR PAPAYA MEALY BUG, PARACOCCUS MARGINATUS
All the farmers have to practice the above control measures simultaneously.
In addition, the same treatment of chemical insecticide spray should be given to near by Agriculture and Horticulture crops also.
Efforts should be made to enmass spray of insecticides to all near by crops and adjoining fallow land, as the pest is polyphagous and it may shift to adjoining weeds also.
NOTE: As a prophylactic measure, all the farmers should compulsorily spray 0.2% D.D.V.P. to mulberry gardens of age 15 to 20 days after pruning in each crop. This will help in controlling other insect pests of mulberry too.
In Sri Lanka & Hawaii islands, release of parasitoids alone has given control of papaya mealybug to the tune of 90-95%. These parasitoids have been already imported. Once they are released in the infested mulberry gardens, spraying of insecticides may be discontinued. 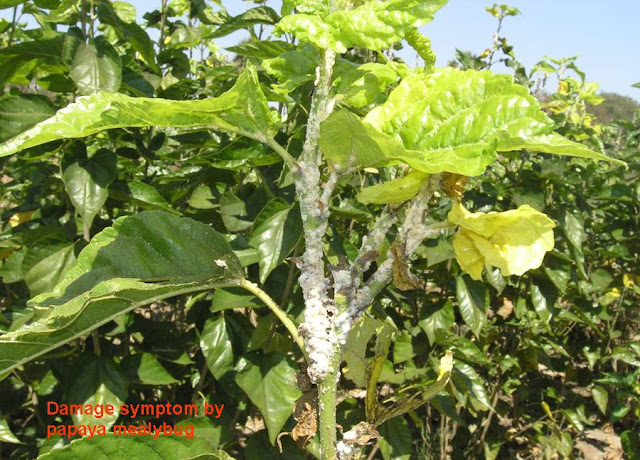 really an eye opener for me.

Sir,
Cryptolaemus beetles have been reported ineffective against papaya mealybug by many scientists. But still this finds in IPM package of this article. Please clarify, Sir.

This is in response to comment by Dr.C.A.Mahalingam. Actually Cryptolaemus beetles (mealybug destroyers) were initially recommended against papaya mealybug due to non-availability of exotic/indigenous host specific natural enemies.

Dear vasudha Prabhakar, the article on papaya mealybug management was written well before the implementation of classical biological control agents. In the case of papaya mealybug damage to mulberry, there an uprooting shpree in theminds of sericulturists. Therefore as an exigency, CSRTI, Mysore along with TNAU, Coimbatore had to take up some exigency measures. Therefore Cryptolaemus was also tried under biological control strategy. CSRTI, Mysore formulated a research project on biointensive management of the said pest in collaboration with NBAII bangalore as well as TNAU and under this project NBAII helped a lot by importing the three exotic parasitoids which u mentioned somewhere during July-August 2010. In a national consultation programme held at NBAII bangalore during October 2010, it was decided to mass multiply Acerophagus papayae, (very aggressive & most effective one) and to make inoculative release. Now the pest is fully under control. If the pest re-appears again, v should go for only none other than classical biological control.

Dear sir,
Although three parasitoids have been introduced to India for the management of Papaya mealybug, but we could only recover Acerophagus papayae upon field release. Sir, what may be the possible reason for this ?

Dear sir,
Although three parasitoids have been introduced to India for the management of Papaya mealybug, but we could only recover Acerophagus papayae upon field release. Sir, what may be the possible reason for this ?

This is in response to clarification sought by Mr.Basanagowda, G. Although 3 parasitoids were imported, not all of them were released to field. Before release, quarantine tests were conducted by NBAII besides efficacy at lab level against papaya mealybug. It was found that only A papayae was very much aggressive and very active. So only A papayae was released ie., inoculative release. Hence u wont find other two parasitoids as they were not at all released. Also, inter species competition will reduce their efficacy, which may be another reason for not releasing all of them.

Sir
Whether Acerophagus papayae is the only effective biological pest control method for papaya mealybug or any biopesticide have been developed against Papaya mealbug.

This is in response to maya Pillai's quiery. For classical biological control of papaya mealybug a total of three exotic parasitoids were imported, because none of our indigenous predators or parasitoids failed to control the papaya mealybug effectively. Among these three, the most effective one A papayae was released to avoid competition between the three. Also, since a papayae is host specific, it has succeeded in controlling the pest very effectively. Therefore till date, except A papayae no other effective bio-control agent is available against papaya mealybug