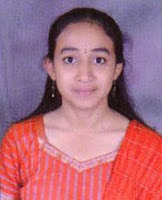 S. Manochaya is a budding researcher, currently working as a project fellow in Biodervisity Bioprospecting and Sustainable Development under Institute of Excellence in Department of Microbiology, University of Mysore. A post graduate in Microbiology, she had earlier worked with M/s. Healtline Pvt. Ltd., Sericare Division, Bangalore as R &D Officer and involved in DBT project “Silk Protein blend film for burn wound management” and in the development of other neutraceutical products. She is interested in Agricultural and Medical Microbiology for herbal drug development. Mr. J. Justin Kumar works with Central Sericultural Research and Training Institute, Mysore, India. His research interests include silkworm pathology and application of bio-molecules in silkworm disease management. They can be contacted at: mcs_nks@yahoo.co.in & justinkumarj@gmail.com
Introduction
In tropical countries like India the success of silkworm rearing depends upon the protection of crop from the disease causing pathogens. In temperate sericulture regions ideal climate, superior quality of mulberry leaves and restricted number of rearing in a year reduces the chance of disease incidence. The reason for outbreak of silkworm diseases in India includes continuous rearing throughout the year, availability of large population of different stages in a limited area, inferior quality of mulberry leaves and unhygienic rearing condition etc. Disease out break not only affects the income of the farmers but also scuttles the seed cocoon and silk production plans. Domestication for the past several thousand years has rendered the silkworm, highly susceptible to different pathogens leading to diseases and crop loss. Different micro-organisms such as viruses, bacteria, fungi and microsporidia cause infectious diseases in silkworm.
Aspergillosis
Aspergillosis is a major silkworm disease in several sericultural countries. This is caused by a number of Aspergillus species of fungi. Aspergillus species have been known to be pathogenic to silkworms since the latest part of 19th century (Nomura, 1897). This disease is commonly called `Kojickabi’ in Japan (Ayuzawa, et al., 1972) and also known as brown muscardine. Many aspergillus species have been reported to infect silkworm (Aoki, 1971). More than 10 species of Aspergillus were reported from Thailand, Indonesia, Srilanka and India (Govindan and Devaiah, 1995) as pathogenic to silkworm, viz., A. flavus, A. tamari, A. oryzae, A. niger, A. ochraceus, A. sojae, A. fumigatus, A. nidulans, A. flavipes, A. clavatus, A. terreus, A. melleus, A. elegans, A. parasiticus, etc. A. flavus Link and A. tamari Kita are most common in India. Aspergillus bombycis Peterson et al. is a recently described species known only from domesticated silkworm [Bombyx mori L. (Lepidoptera: Bombycidae)] culture in Indonesia and Japan (Peterson et al. 2001).
Aspergillus is a facultative fungus and is able to live saprophytically in the silkworm rearing environment like soil surface and rearing appliances, silkworm faeces etc (Aoki, 1971; Ayuzawa et al., 1972). These form the source of the fungus and thus disease spreads rapidly. Though Aspergilli are saprophytic, they are reported to be pathogenic to several insects in addition to Bombyx mori (Govindan et al., 1998). The early instars i.e., first and second instar silkworm larvae are more susceptible and later stage silkworms are fairly resistant to this diseases. High temperature and high relative humidity conditions maintained during young stage are reportedly contributing factors to greater disease incidence during young age (Govindan and Devaiah, 1995). Aspergillus flavus Link. and Aspergillus tamarii Kita are commonly found strains in India.
Systematic position of the pathogen
The Genus Aspergillus belongs to the Family Trichocomaceae, Order Eurotiales, Class Eurotimycetes, Phylum Ascomycota, Kingdom fungi and Domain Eukarya. Though there are hundreds of species of Aspergillus, all are not pathogenic to silkworm. The systematic position of the genus is:
Domain: Eukarya
Kingdom: Fungi
Phylum: Ascomycota
Class: Eurotiomycetes
Order: Eurotiales
Family: Trichocomaceae
Genus: Aspergillus
Mode of infection
Majority of aspergilli grow well and sporulate abundantly at 23 - 26°C (Thom and Raper, 1945). Temperature between 30 - 35°C for Aspergillus flavus and 20°C for A. tamarii are congenial for good growth (May et al., 1931). The thermal death point is 54°C for A. flavus and 55°C for A. tamarii. According to Kawakami (1982), temperature range of 28 - 30°C and relative humidity from 85 to 95% favours the growth of silkworm, which in turn is congenial for aspergillus development. 100% mortality occurs at all combinations of temperature (20, 25 and 30°C) with humidity levels (80, 85, 90 and 95%) (Chinnaswamy, 1983). The disease development is slow at low temperature and more rapid at high temperature.
Aspergillus spp. infects the silkworm through the integument. The conidia are the infectious units and these on coming in contact with host-integument under congenial conditions of temperature and humidity germinate to put forward the germ tube that penetrates through integument.
The penetration is generally observed in the inter-segmental region, the top of leg, the connecting part of seatae and around spiracles. In the low pathogenic fungi, the penetration is significantly delayed or unable to penetrate the larval integument. The germ tube after entering through the epithelium branches at the spot of entry. At the point of entry black marking may be noticed. The fungus does not form short hyphae as in case of B. bassiana and grows only at the site of infection and finally the larva die due to the secretion of aflatoxin. At the hardened site, aerial hyphae protrude to form the conidiophores. The conidiophores are thick and expand into a globular or oval structure called apical vesicle, bearing 1-2 rows of radiating sterigmata. The conidia attach in chains to the sterigmata. The conidia are light and are easily dispersed to spread the disease
Symptoms
Since Aspergillosis is caused by various species of Aspergillus, the symptoms are not always same. Young silkworms are very much susceptible, compared to the mature worms. Infected larvae stop feeding, become letharginc, show body tension and lustrousness and the victim die soon due to Aflotixin produced by the fungus in the host. Aerial hyphae appear a day after death and later conidia cover the body giving particular colour according to the Aspergillus species. Hardening of the body is limited to the site of infection and the rest of the body decay. Diagnosis of the disease is based on the hardening of the corpse and the morphology of the hyphae. 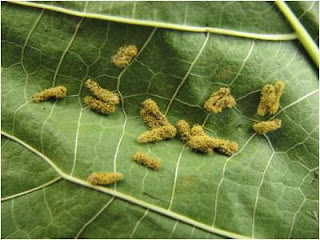 Silkworms infected with A. flavus 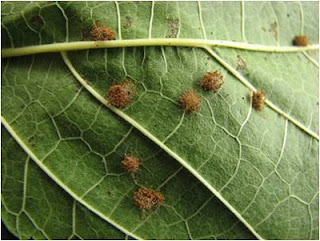 Silkworm infected with A. tamarii

Physiological changes in infected larvae
The pathogen has been observed to produce kojic acid (C6H6O4). The virulence of the strain of A. flavus and their resistance to formalin is related to the production of Kojic acid (Kawakami and Mikuni, 1969). Two toxic fractions also have been isolated from A. flavus that kills the larvae of mosquitoes Culex peus and C. tarsalis (Toscano and Reeves, 1973). The Aspergillus species also produce toxins called aflatoxins. The aflotoxins are very potent carcinogens and produce tumours primarily in the liver of vertebrates, including human being (Wyllie and Morehouse, 1977). Four aflotoxins B1, B2, G1 and G2 have been detected from A. flavus. Aflotixin B1 was highly toxic and G1 was moderately toxic to silkworm larvae. There is correlation between the presence of aflotoxin and the pathogenicity to the silkworm, their tolerance to formalin, and the ability to produce pigments (Ohtomo et al., 1975). A strain of A. flavus in addition to aflotoxin, also produce two more toxins, cyclopiazoic acid (indole tetramic acid) and aflatrem (indole mevalonate meatbolite) (Richard and Gallagher, 1979). A. ochraceus which also infects silkworm produces destruxins (Kodaira, 1961). Toxins produced by A. fumigatus include fumagillin, helvolic acid, fumitremorgins, phthioic acid and gliotoxin among others [http://www.aspergillus.man.ac.uk/index home.htm (accessed on 11/06/2010)].
Incidence and loss
Chinnaswami (1983) reported that in Karnataka, India the percentage of disease incidence ranged from 5.32 (February-March) to 21.36% (July-August). In Thailand, incidence of Aspergillosis is more during June and August and less during September (Aoki, 1971). The disease is noticed on first to third instar larvae during January to February and on fourth and fifth instar larvae during July (Aoki et al., 1972). Singh et al., (2004) reported that the maximum crop loss per 100 layings (50000 larvae) was 1.35±0.73 to 1.61±1.46 kg cocoons. Incidence was higher in bivoltine silkworm rearing than in multivoltine and cross breed.